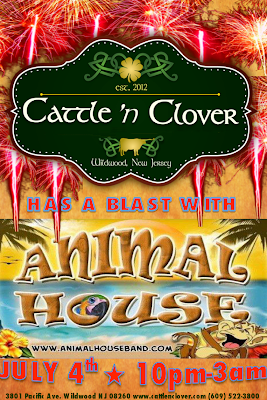 It’s sure to be a heck of a party, and a great time for the whole family. Here’s the official release…

Since Cattle ‘n Clover’s grand opening in March, its unique and growing variety of entertainment has put an Irish jig in the right step toward Downtown Wildwoods’ revitalization.

Cattle ‘n Clover is certainly living up to its rich history in music and live entertainment, serving as the venue (then known as the Rainbow Club) for Chubby Checker’s debut of “The Twist” in the 1950’s.

A large wooden garage door slides up to reveal a stage even Checker himself would be itching to twist on.

The elevated stage opens directly onto the sidewalk inviting everyone to enjoy a variety of entertainment from Singer/Songwriter Kris Scherer to Hydeaway, to Animal House, a six piece party dance band that will rock Pacific Avenue’s upcoming 4th of July celebration, this Wednesday.

Animal House consists of all veteran musicians with a crazy fun following after performances everywhere from Vermont, Key West, and Pacific Avenue in Wildwood. Their first Pacific Avenue performance at the Cinco de Mayo Block Party left the Wilwoods wanting more, and that’s what they will get.

Animal House never fails to stir up an irresistibly good time and this 4th of July will be no different!

“We can’t wait to be the soundtrack to an unforgettable 4th of July at Cattle ‘n Clover on Pacific Avenue”, says Bass Guitarist George Garcia.

It sounds like Cattle ‘n Clover will be the perfect sanctuary, just two blocks away from the crowded boardwalk where everyone can sit back, relax and enjoy live entertainment at the only Irish Steakhouse on the island.