North Wildwood – This April, Green’s Liquor Store at 26th & New Jersey Avenue, Wildwood High School Peer Leaders, and the Greater Wildwoods Municipal Alliance Committee worked together to increase people’s awareness about the legal ramifications of giving alcohol to anyone under the age of 21. All entities played numerous parts to contribute to this year’s ‘sticker shock campaign’ for the prevention of underage drinking.
The Peer Leaders put large red stickers on the liquor store’s bags to inform customers about the consequences of giving alcohol to anyone under the age of 21. If people are aware of the legal risks, they might be less likely to buy alcohol for underage drinkers. Giving alcohol to an underage person can result in maximum penalties of six months in jail and/or a $1,000 fine (Represented on the stickers on the bags). The campaign was to work in conjunction with April already being Alcohol Awareness month. 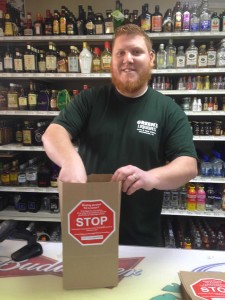 Teens that drink alcohol often get it from “social” sources like parties, older friends and family, or their home. According to the 2013 Pride Survey in Cape May County, 55% of 11th graders surveyed reported that it is easy to obtain alcohol and 28% of 11th graders reported to regular use of alcohol. Underage drinking can have serious consequences for the person, their family and community. Teens that start drinking before age 15 are more than six times as likely to develop alcohol problems than those who start at age 21. Although teens drink less often than adults, they tend to drink more per occasion. Drinking can impair judgment and put our youth and others at risk of physical harm and dangerous behavior, including: academic failure, accidents, depression, sexual behavior, and aggressive or violent behavior.
Community collaboration on prevention projects have been increasing in Cape May County. We are happy that community entities like our organization can come together to work on events/projects geared towards alcohol/drug abuse prevention, including awareness stickers and brochures. “The Greater Wildwoods Municipal Alliance Committee is happy to collaborate with other organizations in order to achieve the common goal of alcohol/drug prevention,” said Kathy McGarry, Chairperson for the Alliance Committee. “We hope that our introduction of a new strategy to decrease underage drinking will draw others to create similar projects in support of a safe and healthy community.” The Greater Wildwoods Municipal Alliance Committee thanks for not providing alcohol to our youth