We have received many emails and messages about tramcar fee going up 50 Cent to $3.50 for the Summer of 2018 and yes, there will be an increase to $3.50.
A lot of people told us they were not happy with the increase. 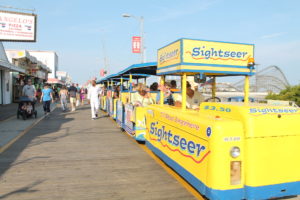 The Wildwood Tramcar is a Boardwalk icon with the famous saying ‘watch the tramcar please” . The original fare was 10 cents one way. A round-trip tram-car ride takes approximately 1 hour. Each tram car runs on a 36 DC-volt battery that weighs more than 2,000 pounds. The batteries are charged each night and can run for about seven or eight hours at a time. Several of the tram cars running on the Boardwalk are the same ones that were built for the 1939 World’s Fair in New York City. The tram cars carry about half a million people up and down the Boardwalk each year.

When I was a kid it was $0.25 to ride the tramcar and I would use it as transportation to get from North Wildwood to my job in Wildwood Crest at the Ocean Holiday Motel where I was a pool boy.

A few years later the fee went to $1 and then I used to ride my bike everywhere on the island I had to go, it was fast, cheap and I never needed a parking spot.

Just like back then the cost of keeping the tramcars running goes up. You have to pay to store them, maintain them, fix them, build new ones, hire people to run them etc. We understand your frustrations but the alternative is no Tramcars on the boardwalk anymore which would change the look, sound and feeling of our iconic boardwalk.