WILDWOOD, NJ – A deluxe lithograph titled “Bobby Rydell’s Wildwood Days” is available as an incentive to fans who donate to help raise funds for the Wildwoods Giant Postcard Exhibition. The display is slated for the island’s Doo Wop Experience Museum. The world’s only exhibit of its kind will feature 20 high-definition enlargements (36-by-24 inches) of vintage scenic view postcards digitally remastered from the original photographic film used to print the cards. 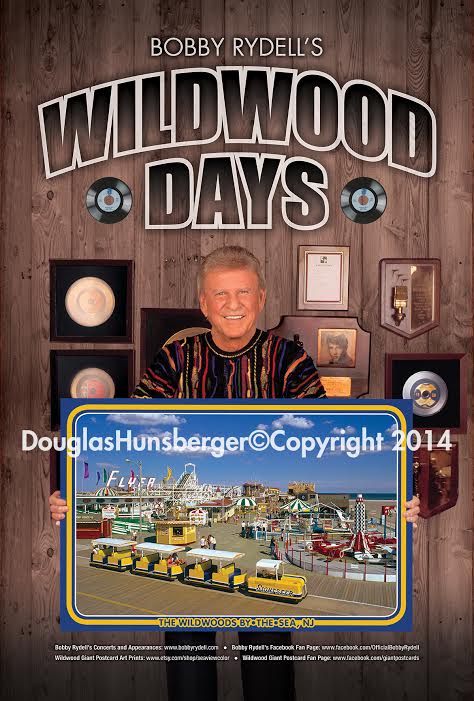 Rydell, the resort’s favorite son, is to Wildwood what Bruce Springsteen is to Asbury Park. His storied career is as essential to Jersey Shore lore as it is to the history of rock and roll.

The performer, whose hometown is South Philadelphia, began his love affair with the Wildwoods with visits as a young child to his grandmother’s boarding house on Montgomery Avenue. When Rydell hit the big time, the family purchased a second property across the street, where, for many years; he spent welcome respites from touring.

In 1963, the recording star released “Wildwood Days,” the song that became the shore town’s renowned “anthem” and catapulted the resort into the national spotlight. A number one smash hit in local markets, the record reached number 17 on the national Billboard charts. Over 50 years later, the catchy tune still receives airplay – a testament to the song’s longevity.

The image depicts Rydell holding a limited-edition Wildwood Giant Postcard titled “Hunt’s Pier with Tramcar,” now on display in his home. The iconic amusement venue was also his favorite. “I loved the ‘Flyer,’” said Rydell; “it was my very first roller coaster ride.”

A welcome addition to any décor, the 18 inch-by-12 inch commemorative art print is small enough for any wall space, but large enough for optimum visual appeal.

Rydell was also consulted to help select the 20 images for the exhibition from more than 60 “Designer Series Postcards,” photographed and produced by visual artist Douglas Hunsberger, for the original line of postcards in the 1980s.

Now you can relive your very own “Wildwood Days” with Bobby Rydell and help save these images for historic preservation. The deluxe lithograph is available at:
http://gogetfunding.com/project/giant-postcard-exhibition
Email: giantpostcards@rocketmail.com
Facebook: www.facebook.com/giantpostcards

The Giant Postcard Exhibition, the World’s only exhibition of its kind, is composed of 36-by-24 inch enlargements of “Designer Series Postcards” produced in the 1980s. During the summer, it will be on display at the Doo Wop Experience Museum, located directly across from the Wildwood Convention Center on the Boardwalk. The exhibit will be available to colleges, universities, libraries, and other venues in the off season, to help promote tourism in the Wildwoods.

“Designer Series Postcards” were scenic view postcards distributed to gift shops, motel lobbies, stores and other retail outlets in the Wildwoods from 1981 through 1988. They redefined fantasy with a high-gloss finish. Before this, postcards looked nearly the same regardless of what company produced them; in marketing terms, there was little or no product differentiation or brand identification. To give Designer Series Postcards a brand-defining characteristic and distinctive look, they featured brightly colored wrap-around borders. The cards were titled with the town of origin as a design element at the bottom of the card. The new graphic treatment was the first of its kind.

WHY ARE GIANT POSTCARDS TRULY UNIQUE?

The concept of making enlargements from postcards is hardly new; however, giant postcards are truly unique. Prior to this endeavor, they have been produced from scans of the printed cards. Unfortunately, when these images are only slightly enlarged or viewed up close, it becomes immediately apparent that the dot pattern used in the printing process has severely degraded the image.

The amazing difference is that Giant Postcards use digitally remastered files made from drum scans of the original materials (photographic transparencies) that were used to print the cards. Three of these images have already been remastered. Plans are to perform this process for a total of twenty Giant Postcards to complete the display. Time is of the essence, because some of the images have already started to fade.