WILDWOOD, N.J. – August 4, 2017 – Roar to the Shore adds Rock and Roar 2017 to schedule of events. Rock and Roar 2017, a rock concert that will take place on the Wildwood beach behind the famous Wildwoods welcome sign, will feature national artists Eddie Money, Foghat, The Michael Allman Band and up and coming artists Dead Fish Handshake
on Friday, September 8, 2017. Gates and concessions open at 5 p.m. Show will begin at 6 p.m. Tickets are available at https://rockandroarnj.eventbrite.com. 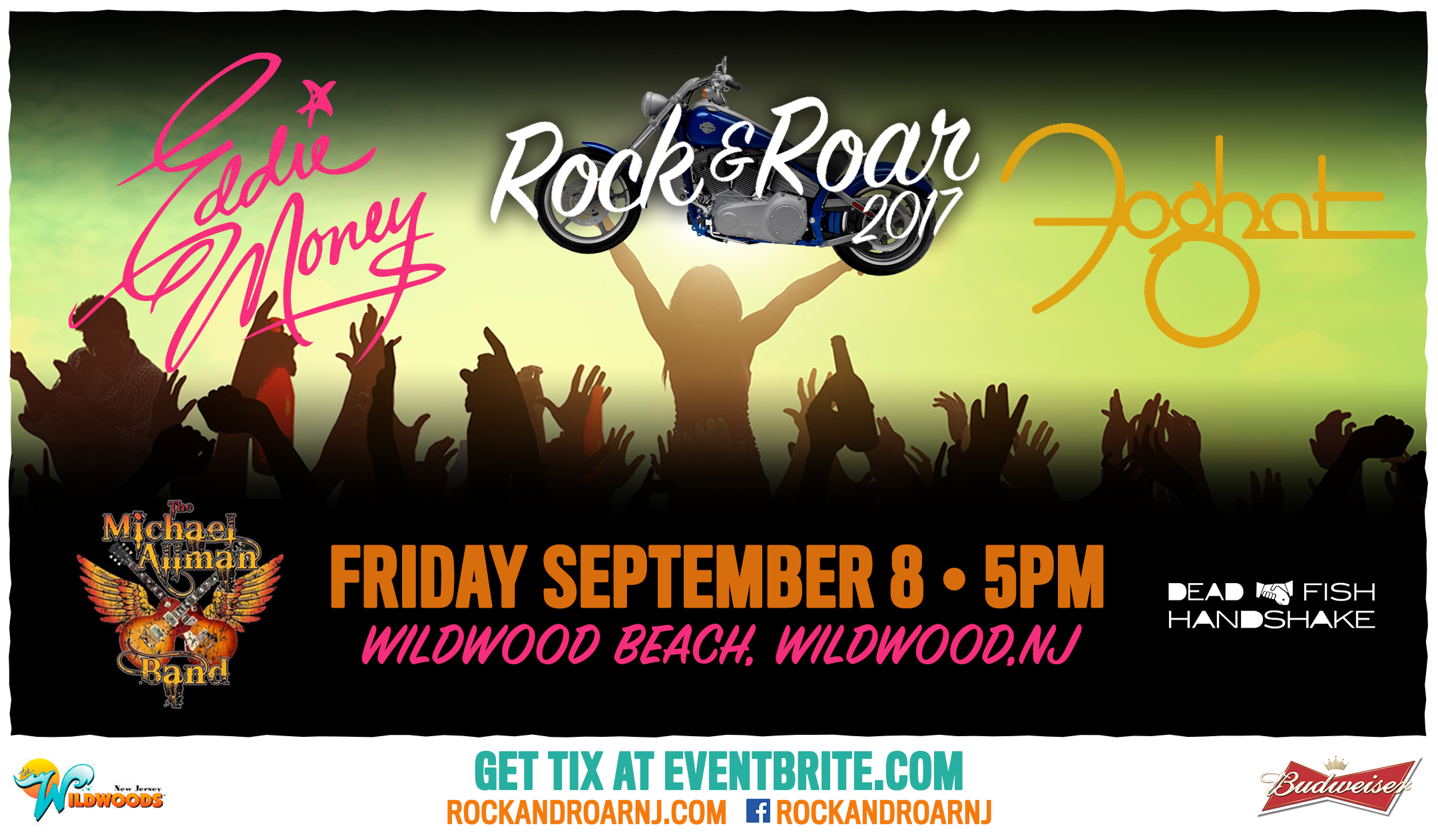 Eddie Money, a former NYC police officer, burst onto the music scene in the late 70’s and has never looked back. Eddie continues to astound crowds with his high energy performance leaving a lasting impression on concert audiences. Eddie has sold over 10 million albums and is best known for hits “Two Tickets to Paradise and “Baby Hold On.”

Foghat has been a staple of classic rock radio for over 30 years. Their hits “Slow Ride,” “I Just Wanna” and “Stone Blue”have been used in countless movies, tv shows and commercials over the years. Currently, their live shows include them playing their classic 1977 album “Foghat Live” in its entirety.

]Michael Allman, lead vocalist of The Michael Allman Band, continues to spread his family’s blend of roots, rock and blues. The eldest son of Gregg Allman, Michael will perform original songs from his album “Hard Labor Creek,” as well assongs his Dad made famous in The Allman Brothers Band.

Dead Fish Handshake is a New Jersey based band catching the eye of the music industry. They were winners of the Rock Carnival Talent search having beaten out hundreds of entrants to receive a slot on the event. This event marks theirSouth Jersey debut.
The City of Wildwood is thrilled to welcome these four groups to town, making a great addition to the annual Roar tothe Shore event. “This is an awesome addition to Roar to the Shore. It’s a component I am happy to see added to already great event,” said Ernie Troiano, Mayor of Wildwood.
Roar to the Shore is hosting its’ 21st year in Wildwood and unlike similar motorcycle rally’s, this event has not been able to gain traction in adding a musical component until now. “The Rock and Roar concert on the beach will take our event
to the next level. It’s a welcomed addition to the weekend,” said Joe Murray, Roar to the Shore organizer. Roar to the Shore begins on Thursday, September 7 and continues through Sunday, September 10 with a list of events for motorcycle enthusiasts and guests. For more information on this event, visit: www.roartotheshoreonline.com.
Rock and Roar 2017 featuring Eddie Money, Foghat, The Michael Allman Band and up and coming artist, Dead Fish
Handshake on Friday, September 8, 2017 will keep the City of Wildwood rockin’ through the weekend. Tickets are on
sale now for $39.50 each or Buy 3, Get 1 Free with the “Four on the Floor” 4 pack at:
https://rockandroarnj.eventbrite.com. For more information on Rock and Roar 2017, visit: www.rockandroarnj.com.