Wildwood’s real estate boom can be disorienting. Have you driven down a street in recent months and found yourself looking for buildings that are no longer there?

Believe it or not, lightning-fast demolition is not a new phenomenon on the island. 100 years ago, Wildwood’s residents awoke to find one of their most treasured landmarks had disappeared. City Commissioner Oliver Bright had led a clandestine crew of laborers to do a job that many citizens opposed. The men worked under cover of darkness and in the morning, wood pilings and scraps were laid out along Atlantic Avenue, and the boardwalk was gone.

It wasn’t the first time a boardwalk in Wildwood had been disassembled. Initially, boardwalks were little more than wooden walkways that allowed pedestrians to pass over sandy terrain. According to a paper written by Robert J. Scully, Sr., curator of the Wildwood Historical Society, boardwalks connected Anglesea’s hotel and cottages as early as 1884, and by 1893 Holly Beach had boardwalks around its dance halls and pavilions.

Each of Wildwood’s early communities had their own promenades. Wildwood Crest’s boardwalk ran along what is now Seaview Avenue. North Wildwood’s walk was located “two hundred feet east” of where it is today. In 1898, Mayor Latimer Baker recommended that Wildwood erect a boardwalk “on the easterly margin of Atlantic Avenue.”

Over time, these walks were modified and reconstructed, and by the early years of the twentieth century, a boardwalk stretched from North Wildwood into the Crest. 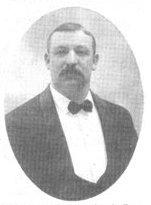 As the boardwalk expanded, it became an entertainment center. Amusement rides, eateries and bandstands soon appeared. Blaker’s Pavilion was an early landmark, and in 1906 its proprietor, Gilbert Blaker had applied for permission to operate 20 rolling chairs. These wicker chairs with wheels became a popular amusement for visitors who were pushed along the boardwalk for a small fee.

Blaker would soon be at the center of the controversy which led to Oliver Bright’s midnight escapade. Wildwood’s beach was growing every year and the boardwalk was in disrepair. The city authorized the construction of a new structure, which would run closer to the ocean, but Blaker challenged the move in court. The city ignored an injunction to halt demolition of the walk, and several people were found in contempt of court and fined. The boardwalk project was stalled.

Few written records of the incident exist, but according to Bright, the other city leaders had gone to Washington DC to visit the local senator. “The way it was told to me, was that the politicians left on one train and the workers came in on another,” Bright explained

According to a paper by Robert Scully, Sr., Wildwood Historical Society’s curator, “Oliver Bright and a group of hired hands, including Bright’s son, Robert, Sr. who was 11 years old at the time, tore up the boardwalk with only the pilings left as a silent reminder of where the walk had been.”

“The police couldn’t even stop him,” Bright explained, “Because they were under his jurisdiction.” The midnight caper was not popular with many boardwalk business owners, and angry protests ensued. When the dust settled, Bright was removed from office in a recall election.

Blaker eventually submitted to the city in the legal proceedings, and in August of 1921, the new boardwalk was completed where it stands today.