Courtesy of The Wildwood Historical Society

The idea of a boardwalk originated when a railroad conductor, Alexander Boardman, got tired of cleaning beach sand from his trains. He suggested constructing a wooden walkway for seaside strolls. Atlantic City dedicated the first boardwalk in 1870. Thirty years later the City of Wildwood laid its first boardwalk directly on the sand along Atlantic Avenue, from Oak Avenue to Maple Avenue, just 150 yards long. Each fall it was taken up and stored for the winter. 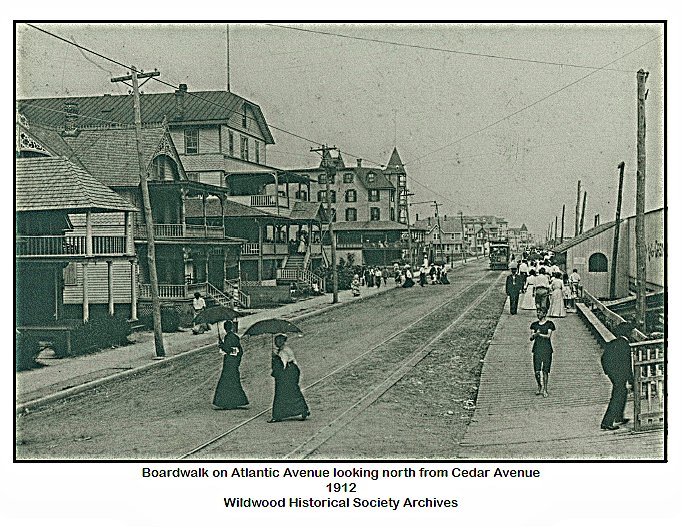 In 1903 Wildwood’s leaders decided to provide a wide, elevated walkway closer to the ocean. It connected with Ocean Pier, the first amusement pier to be opened, at Poplar Avenue. During the first decade of the 20th century, the boardwalk spread across the shoreline, from Second Avenue in North Wildwood to Cresse Avenue in Wildwood. Another boardwalk from Cresse to Aster Road in Wildwood Crest washed away in 1909 and was replaced by Seaview Avenue.

In 1920 Wildwood City Commissioner Oliver Bright, determined to move the boardwalk even closer to the ocean despite public opposition, organized hundreds of workers to tear up the existing boards in his district in one night. The new walk was ready for the summer, but Bright was bounced from office.

For decades, rolling chairs dotted the walk. For 25 cents per hour, pushers would propel the chairs, usually occupied by ladies and gentlemen wearing their best coats, shawls and furs. The chairs disappeared in 1946, making way for tram cars to take foot-wear passengers from one end of the boardwalk to the other.

Early in the century, the boardwalk was the place to see and be seen. Back then, strollers paraded in their finest clothing and accessories. Today a more casual style prevails. And whereas people “walking the boards” were at first content with simply strolling by the ocean and meeting their neighbors, today’s boardwalk visitor seeks thrills and excitement.

Over the years, amusement centers sprang up all along the boards, such as Fun Chase Pier, the Starlight Ballroom, and Blaker’s Pavillion at Cedar Avenue. Baby Boomers recall times spent at Casino, Marine, and Fun Piers, and Sportland Pier and Pool.

Perhaps the most fondly remembered ride was the indoor carousel at Cedar Avenue. This grand old merry-go-round with its proud ponies and lively music was a favorite of children and adults alike. The carousel and the popular, but decaying, Jack Rabbit roller coaster were removed in the 1970s to make way for Nickel’s Midway Pier.

Hunt’s Pier, built on the site of Fun Chase Pier, was a favorite of the 1960s and early ’70s, with the Flyer roller coaster, Golden Nugget Mine Ride, and Pirate Ship haunted house. Hunt’s closed in the 1980s, re-opening briefly as Dinosaur Beach Theme Park.

Will and Bill Morey began their amusement empire in 1969 with the construction of a giant slide at 26th Avenue, called the Wipe Out. The Wipe Out still stands, and it was soon joined by a heart-stopping haunted house, the Kong airplane ride, and the Jumbo Jet steel coaster. In 1976, the Morey’s bought the failing Marine Pier at Schellenger Avenue, developing it into Mariner’s Landing. Later, they added hugely popular water parks at the end of each pier. The Morey’s also acquired Fun Pier, popular in the 1960s, renamed it Wild Wheels, and added the wood and steel Great White coaster, and the DooWopper a family style coaster with a ’50s twist.

The Wildwoods Boardwalk remains our island’s preferred place for quiet strolls, morning bicycling, calorie consuming, games of skill, and thrills galore. Perhaps the last of America’s great boardwalks, it survives as an authentic American shared experience. It changes with the times, but remains a timeless attraction for all ages.